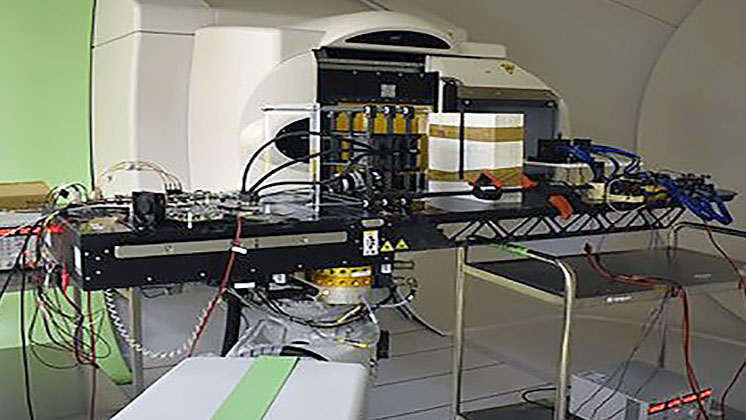 The IRIS (Image Reconstruction, Instrumentation and Simulations for medical imaging applications) research group of the Corpuscular Physics Institute (IFIC, UV-CSIC) has successfully tested a new, more effective and less invasive system for monitoring hadronic therapy against cancer. This technology, in the proof of concept and recovery phase, has funding from the Valencian Innovation Agency and the Ministry of Science and Innovation.

The Corpuscular Physics Institute (IFIC), a joint centre of the University of Valencia and the Spanish National Research Council (CSIC), has successfully tested the system designed to monitor hadronic therapy, a new type of cancer therapy which, unlike conventional X-ray radiation therapy, uses heavy charged particles, usually protons. Thanks to the physical property of this type of particles, it is possible to concentrate the radiation dose in a localised way, which reduces the risk of damaging healthy tissues. Also, heavy particles destroy the tumour more effectively than photons.

Tested in the clinical facilities of the proton therapy centre in Krakow (Poland), the system is designed for the treatment of tumours that conventional techniques do not reach or do so with difficulty. This is the case of those cancers that require high doses of radiation for their control and are located near organs at risk; or paediatric tumours, given the sensitivity of organs that are still developing.

The IRIS medical physics research group is working on improving diagnosis and therapy monitoring using a Compton camera-type gamma ray detector. “Currently, the monitoring techniques that are being used present problems of low efficiency or integration with treatment”, says Gabriela Llosá Llácer, coordinator of IRIS. “In this sense, the Compton cameras are showing great capacity to obtain images of photon distributions in the MeV energy range, with a more compact design and greater ease of integration in the treatment room than other technologies”, adds the scientist.

Valuation of the monitoring system

The close collaboration of the IRIS group with the National Accelerator Center (CNA) in Seville, the KVI-Center for Advanced Radiation Technology (Groningen, the Netherlands), or the Quironsalud proton therapy centers in Madrid and Krakow (Poland), among others, has served the group to identify the appropriate improvements in the prototype and position itself as one of the most advanced among the groups working on the development of Compton cameras for this application.

The group also has a patent for a new system and method for the detection and identification of unwanted events that degrade the quality of the signal, capable of improving the performance of the device.

The new system is in the technology valorisation phase through the VALMONT project, funded by the Valencian Innovation Agency (AVI), as a preliminary step to its introduction on the market. A clinically viable prototype is currently being developed and validated in order to raise its Technology Readiness Level (TRL) to level 7. In addition, the VALID project, funded by the Ministry of Science and Innovation, will allow tests to be carried out in the proton therapy centre Quironsalud in Madrid and evaluate its use in other areas as well.