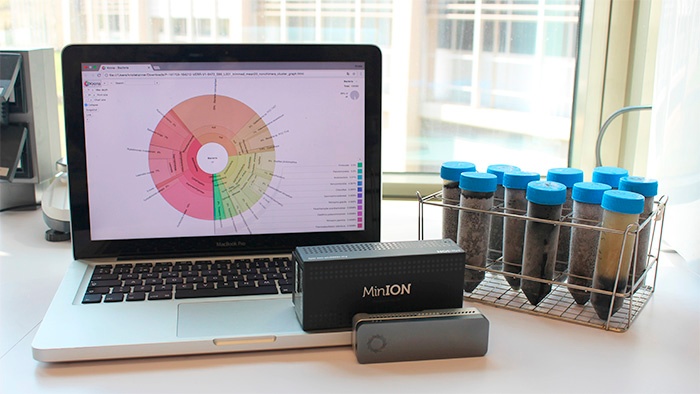 The proposed technology allows to improve the microbial community present in the digesters, and increase between 50 and 60% the daily production of biogas from wastewater

Anaerobic digestion is an established technology that allows the microbial conversion of the biomass present in sewage sludge into methane and carbon dioxide. The production of a biogas plant depends on the microorganisms inside, the composition of which is one of the keys for its proper functioning. One of the drawbacks of the techniques commonly used for the study of these microorganisms is that they are slow and, therefore, the analysis of anaerobic microbiomes is known once production is complete. However, for the first time, it has been possible to intervene in the process "practically in real time" through the application of a third generation portable sequencer. This fact has been confirmed by the biotechnology company Darwin Bioprospecting Excellence, installed in the University of Valencia Science Park, and the result of its research has been published in the journal Bioresource Technology.

"What we have done is to apply a third-generation portable sequencer to a production plant located in Jena (Germany), which has allowed us to monitor communities practically in real time," explains Cristina Vilanova, Chief Scientific Officer of Darwin Bioprospecting Excellence

The results presented also show that the feeding strategy of digesters greatly influences the success of the process. "Using common cultivation or sequencing methods, it is difficult to access the underlying microbial diversity. High-throughput sequencing allows enough sequences to be produced to cover most of the species hosted in the sludge, but often the readings of the 16S-rRNA sequence are short and do not allow a more specific taxonomic classification; however, the portable sequencer MinION that the Spanish company has applied here has allowed it", underlines Christian Abendroth, a researcher at the German plant.

"The MinION tool offers the sequencing of the archaea of ​​the plant in a few hours, which allows introducing changes in the digester and, therefore, improve production on time, before the process ends", says Vilanova. "We have reduced the response time from a few weeks to a few hours," she says.

The uses of bioprospecting

Founded by scientists from the University of Valencia and the Spanish National Research Council (CSIC), as well as experts in the economic and industrial sector, Darwin Bioprospecting Excellence was installed in the University of Valencia Science Park after being selected by VLC/STARTUP, the program to boost entrepreneurship that the FPCUV drives.

The services offered by Darwin are based on bioprospecting, that is, on obtaining natural microorganisms for their application in industrial or biomedical processes. It consists of a complete service from start to finish, from the collection of initial samples, through the cultivation, isolation and identification of strains of interest in the laboratory, to the production of selected microorganisms for their outstanding biological activity.