The spin-off EpiDisease will receive € 344,000 from the Botín Foundation to accelerate the arrival on the market of a AIS diagnostic test 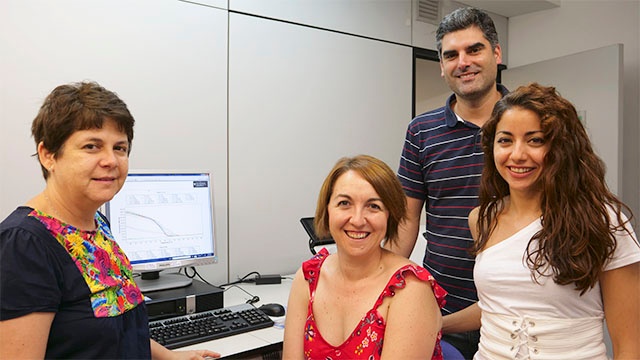 The company is developing a highly sensitive in vitro kit that will change the current way of monitoring patients through the continued use of X-ray.

The spin-off EpiDisease will receive 344,000 euros from the Mind The Gap program of the Botín Foundation to accelerate the arrival on the market of a diagnostic test for idiopathic scoliosis in adolescents (AIS) developed by the company. Specifically, "it will serve to finance the development of the prototype of the kit and the clinical validation of the prognostic function", explains José Luis García, executive director of the company installed in the University of Valencia Science Park.

"The ScoliPro® device is a diagnostic kit that has a clinical sensitivity superior to the conventional method for detecting this disease, that is, radiographies. This new molecular test will help specialists to identify early on people with higher risk of developing AIS, as well as to decide on the follow-up and treatment of these patients in a more specific way. For the moment, it is the only in vitro prognostic tool not only in Spain, but also at the international level ", explains Salvador Mena, scientific director of EpiDisease.

"Until now all children with a slight deviation of the spine should undergo X-rays every six months because it is not possible to predict whether this deformation will lead to more serious cases, that can lead to respiratory problems and especially to psychological effects. It is well known that during the growth period radiographies increase the incidence of cancers in adults. To prevent this, what we do is a blood test of these patients and we can predict the progression of the disease. The clinical sensitivity is around 100%", Mena explains.

These results have been obtained through a research project that has been carried out since 2013 at the Universitary and Polytechnic Hospital La Fe in Valencia. "In this project we have been able to identify the biomarkers that are going to be part of the kit, and once the analytical validation has been completed, we will start clinical validation at European level from 2019; this time in prestigious hospitals in Italy, Finland, Switzerland, England and Holland", says José Luis García.

In this sense, the Botín Foundation's financial aid, aimed at companies interested in promoting and promoting projects based on knowledge and/or technology held by a Spanish research institution, is "a boost to the company", because "firstly, it gives us the funds necessary to make the project successful; secondly, because it brings us an external consultant with experience in the biotech sector; and thirdly, because we gain visibility in the search for investment for this second phase of validation international level". The funding comes now after submitting the application to Mind The Gap in 2016 and passing the three required phases of screening, evaluation and die diligence.

Selected by VLC/STARTUP and 5U CV Startup

EpiDisease was set up in June 2014 as a spin-off of the Centro de Investigación Biomédica en Red (CIBER) and a year later it was recognized as a spin-off of the University of Valencia and the INCLIVA Health Research Institute. Its promoters are Jose Luis García, a postdoctoral researcher at CIBER; Salvador Mena, assistant professor doctor of the Faculty of Pharmacy of the University of Valencia; Federico Pallardó, professor of the Department of Physiology of the Faculty of Medicine at the academic institution; and Lorena Peiró, coordinator of the INCLIVA Biobank.

Selected by the VLC/STARTUP Entrepreneurship Program, from the University of Valencia Science Park Foundation (FPCUV), it was installed in 2015 in this innovation ecosystem, where they began to develop the diagnostic kit for the AIS "while offering specialized services in epigenetics for research centers and companies", says its scientific director.

EpiDisease was also the beneficiary in 2017 of the NEOTEC Program of the Industrial Technological Development Center (CDTI), "with whose funding we will pass all the necessary tests to obtain the European mark for in vitro tests, the CE-IVD".

In addition, it has been awarded by the Empren Jove Program of the Generalitat Valenciana in 2014 and by the 5UCV Startup Contest in 2016. That same year, EpiDisease was selected by the Foundation for Health Innovation and Prospecting (FIPSE) to receive mentoring from six months at the Massachusetts Institute of Technology (MIT) along with experts in the American health sector. "All these helps suppose a support to save the main pitfalls of EpiDisease, which are the obtaining of clinical samples and the maintenance of the own company".