Ángela Pérez, distinguished with the Businesswoman Award granted by the University of Valencia

This award recognizes the professional career of the CEO of the IMEGEN, "whose leadership has allowed to open the way for the rest of women in the executive and business field"

Ángela Pérez, general director and president of the board of administration of the Institute of Genomic Medicine (IMEGEN), has been recognized today with the UVocupació Award to Woman Directive or Businesswoman "whose leadership has allowed to open the way for the rest of women within the executive and business environment". The University of Valencia, through the Vice-Rector of Employment and Training Programs, recognizes with these awards the work done by companies, organizations and entities in the promotion of quality employment, especially young employment.

With a degree in Biological Sciences, Ángela Pérez began her career as a researcher at the University of Valencia, participating in the first European projects of complete genome sequencing and publishing two articles in the scientific journal Nature. In 1998, with only 24 years, she founded one of the first biotechnology companies in Spain and the first dedicated to human genetic diagnosis, Sistemas Genómicos. In 2009, Pérez founded IMEGEN in the University of Valencia Science Park, an international reference laboratory in human genetic diagnosis, where she holds the position of CEO and chairman of the board of directors.

IMEGEN is one of the leading companies in Europe as a laboratory specializing in oncogenetics, dedicated to research and development in human genetic diagnosis, working in the field of precision personalized medicine, offering DNA analysis aimed at characterizing tumors and assigning the best treatment to each cancer patient. This company has achieved a turnover of 7.2 million this year, has a workforce of 65 people and exports 32% of all services and products it generates to 25 different countries.

The award ceremony took place this morning at La Nau Cultural Center of the University of Valencia. Chaired by the Principal, Maria Vicenta Mestre, Ángela Pérez has received the award from the General Director of Planning and Services (Labora) of the Generalitat, Eva Hernández, along with numerous academic and political authorities, and a nourished representation of the Valencian business sector, entities and organizations.

With recognition in their hands, the entrepreneur has stressed that "this recognition that I gather is for the team of IMEGEN, consisting of 85% women," by a staff where "73% of professionals have a degree and a 10% a PhD, that is, it is a high quality job ". Ángela Pérez underlined that every year she collaborates with the employment service of the University to select between 10 and 15 interns, whom we "have great pleasure in forming". In fact, she added, "75% stays working with us." 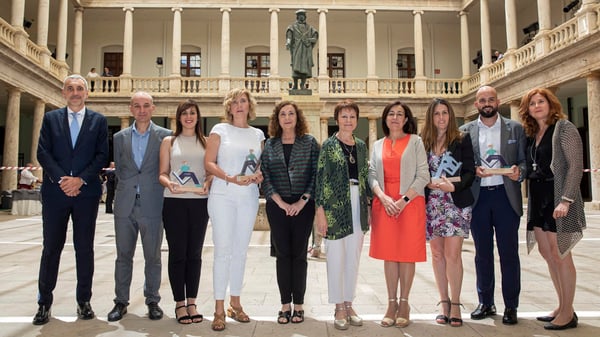 The CEO of IMEGEN explained that she has "the great honor of managing one of the 7 genetic diagnostic companies in Spain and one of the 600 that exist in the world." "We live in a city that houses three high value-added genetic diagnostic companies, so I would like to encourage students to please approach companies like mine and even dare to form companies like IMEGEN. I am an example to encourage you that everything is possible and that it is not necessary to go far from Valencia to set up a company of this type".

The other companies and entities recognized in this first edition of the UVocupació Awards have been the Adecco Foundation for Labor Integration (Labor Inclusion Award for people with disabilities); Spanish Maicerías S.A. - Dacsa Group (Business Responsibility Award); and the València Activa Foundation of the Pact for Employment of the City of Valencia (Young Occupation Award). The jury that has evaluated the 55 nominations presented was chaired by the rector and has been made up of experts and experts in the economic and business field, as well as institutions and specialized services.

This recognition joins other two that Angela Pérez has received throughout 2019. In March, the IMEGEN CEO was recognized with the Research and Development Award of the valencian economical journal Economia 3, and two weeks ago she was honored with the Woman Entrepreneur Award that CaixaBank grants in the Valencian region.

Ángela is a co-founder and collaborates as an advisor in up to 8 biotechnology companies and has participated in numerous presentations related to entrepreneurship, the foundation of technology-based companies and the promotion of women in senior management positions. She will be responsible for closing the 7th Edition of the Mentoring Program of the Chair of Business Culture with the lesson Challenges of the entrepreneur in front of the selection of their ideal partners.