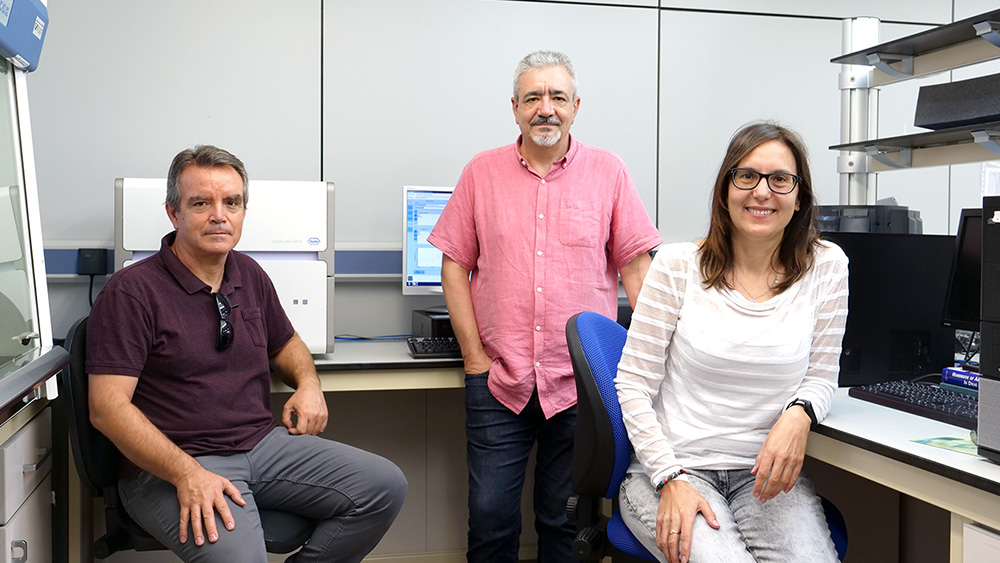 The EOSAL project of the biotechnology Sequencing Multiplex (Seqplexing) and the Institute of Integrative Systems Biology (I2SysBio), both in the Science Park of the University of Valencia, has been selected by the RETOS-COLABORACIÓN program of the Ministry of Science and Innovation. The team will apply a company patent for the detection of genetic alterations for the diagnosis of non-hereditary cancers, mainly.

The variations in the number of copies (CNVs) can affect different regions of the genome, contributing to the development of diseases such as some cancers or certain metabolic disorders such as familial hypercholesterolemia.

Despite their importance, it is not easy to have maps and databases of copy number variants in the genome, since their identification generally depends on slow and sophisticated procedures. However, Seqplexing has commercialised products, based on its own patent generated five years ago, that allow the detection of genetic alterations that cause hereditary diseases by means of a capillary sequencing technique – fast, simple and efficient – that will be incorporated into the systems shortly of hospital analysis.

The EOSAL (Easy One-Step Amplification and Labelling) project, now selected by the RETOS program, involves an improvement in this technique – which incorporates new software for the almost instantaneous interpretation of the data released by EOSAL –, and its application is aimed this time at the analysis, through new generation sequencing, of CNVs and somatic mutations in more complex samples, such as non-hereditary cancers, a field of great importance for precision medicine.

“This technique allows to obtain, identify and analyse a high number of fragments of interest designed according to the needs of the study. The simplicity of the protocol, which is carried out by means of a single step, reduces handling and analysis times – the entire process lasts just over two hours –; facilitates laboratory work in hospitals and reduces the probability of error”, comments Carmen Ivorra, scientific director of Seqplexing and co-author of an article published in Clinical Chemistry (Clin Chem. 2020 Feb 18) that supports the idea that EOSAL technology It is an alternative to MLPA, a traditional technique for the study and characterisation of CNVs.

To carry out the project, the company will work in cooperation with the Theory, Bioinformatics and Computing Group (TBC) of the I2SysBio, a mixed centre of the University of Valencia and the CSIC, both holders of the award from the RETOS-COLABORACIÓN program.

The university group will approach the project from bioinformatics in two ways. On the one hand, it will develop a computer program to facilitate the experimental design of the new kits. On the other, it will create a web application for the processing and interpretation of the sequencing data generated by EOSAL. “It is a work model technologically linked to the I2SysBio ‘Garnatxa’ supercomputer, a machine for bioinformatics capable of providing almost immediate and highly reliable results”, says Vicente Arnau, professor at the Department of Informatics at the University of Valencia and responsible for the project at I2SysBio. According to Wladimiro Díaz, head of the same department and also a member of the group at the Institute, “it is a multi-computer cluster expressly designed for bioinformatics and computational biology. The equipment is structured around a globally distributed file system with a capacity of 3.2 Pb, it has a RAM memory of more than 17 Tb and a computing power of 648 cores”. Acquired with ERDF funds, the supercomputer is available to both the scientific community and biotechnology-based companies.

The objective of the RETOS call, which takes place within the framework of the State R & D & i Plan, is to finance cooperation projects between companies and research organisations, in order to promote the development of new technologies and the application new ideas and techniques, as well as contributing to the creation of new products and services.

The group of Theory, Bioinformatics and Computation (TBC) has as its main objective the analysis of bioinformatics data. He works on metagenomic and genomic data, interaction networks and, in general, on the application of mathematical methods with high-performance computers for the analysis of large volumes of data. Its main line of research is metagenomics.

Seqplexing is a firm focused on the design of quality solutions for the performance of genetic studies. The company stands out for the development of products that are very easy to use and implement in different types of genetic studies applicable to both research and clinical practice.