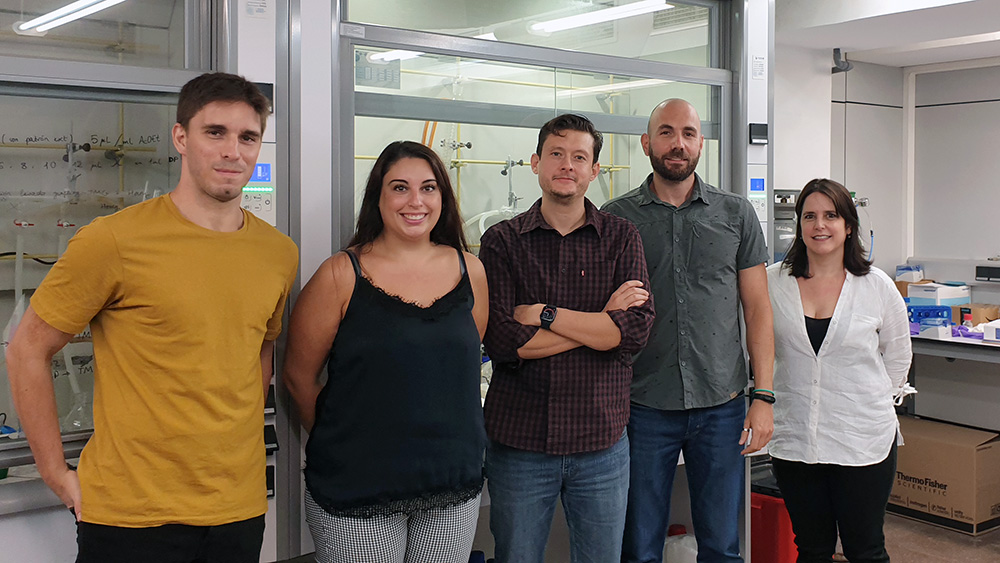 A team from the Institute of Molecular Science (ICMol) of the University of Valencia has succeeded in synthesising a new porous material that enables the degradation of compounds analogous to nerve agents used in chemical warfare to be catalysed. This material will allow to capture and degrade this type of compounds that until now could not be eliminated. The work has been published in the magazine Chem.

Nerve agents are highly toxic chemicals that poison the body’s central nervous system and prevent it from working properly. They act quickly and their effects range from dizziness to death in the most extreme cases. An example of these agents is Sarin, a synthetic compound classified as a weapon of mass destruction and used in terrorist attacks such as the Tokyo subway in 1995 or, more recently, the 2013 Ghouta massacre in the framework of the Syrian War. Currently, the reference material to capture these gases is activated carbon, which allows them to be retained, but not eliminated.

The ICMol team led by Carlos Martí-Gastaldo, FuniMAT, works with porous materials called MOFs (Metal-Organic Frameworks, from its acronym in English) whose versatility allows creating design materials by modifying their properties. In this way, they have succeeded in synthesising a new family of highly efficient and chemically stable MOFs (MUV-101) that are capable of degrading a Sarin gas analogue in a way that is very similar to enzymes, the biological catalysts par excellence. “On a laboratory scale, we use nerve agent analogues to avoid the problems derived from their obvious toxicity. That is why we are working with foreign defense agencies to certify that this degradation can be extrapolated to Sarín gas itself”,explains Martí-Gastaldo.

The stability and efficiency of these designed molecular buildings has been achieved thanks to the incorporation of titanium and iron in their structure. The study published in the magazine Chem shows that both metals together have a much higher activity than they would have separately, thus achieving a cooperative catalysis that allows efficient degradation of the nerve agent in water, without the need for any specific or additive medium for the reaction to take place.

These new materials, in whose conception and development Javier Castells, Natalia M. Padial, Neyvis Almora, María Romero and Sergio Tatay have participated, have already been patented and can be easily integrated into protective suits or gas masks. For this reason, they can be of great interest in security matters, both in the defense of countries against threats of chemical warfare, and the environment as well as for personal protection against strong insecticides or the decontamination of waters.

The Inorganic Chemistry Department of the University of Granada (Spain), the Rutherford Appleton Laboratory (United Kingdom), the Centre for Nuclear Sciences and Technologies of the University of Lisbon (Portugal) and the company Micromeritics Instruments Corporation have also participated in the work. (USA).