Living cells as ‘minifactories’, cutting graphene nanofragments or the new ‘attochemistry’, at the XX Science Conference of ICMol 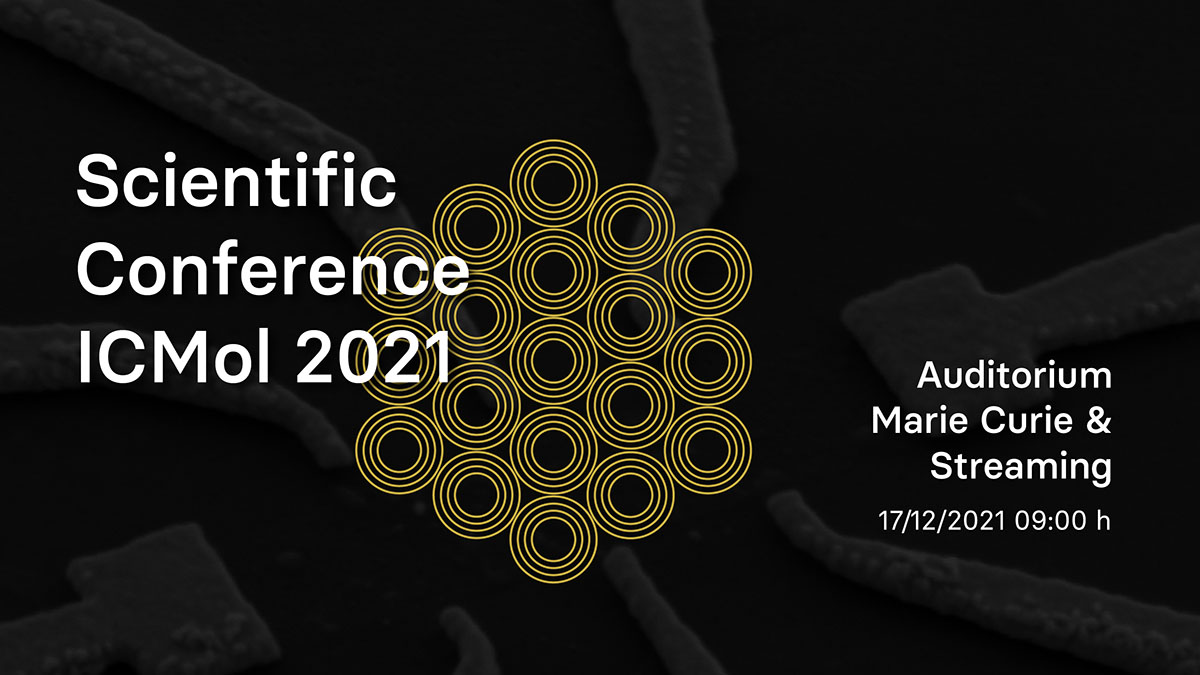 The Institute of Molecular Science of the University of Valencia (ICMol) celebrates this Friday, December 17, the XX edition of its Science Conference. The meeting will review the status of this research centre recognised as María de Maeztu Unit of Excellence and will put on the table, in a highly publicised tone, the latest advances in different fields of nanoscience. The conference will take place in the Marie Curie Auditorium of the Science Park and will conclude with a round table on policies for the incorporation and retention of scientific talent.

The director of the centre, the professor at the University of Valencia Eugenio Coronado, will be in charge of the welcome to the event, which will have a hybrid character – in-site and via streaming –. In addition, their presence at the opening ceremony was confirmed by the regional secretary for Universities and Research, Carmen Beviá; the vice-rector for Innovation and Transfer of the University of Valencia, Dolores Real; the vice president of the Valencian Agency for Innovation, Andrés García Reche, and the regional coordinator of the CSIC, Juan Fuster, among others.

In the usual science segment, the conferences of guest researchers will be given by the professor of Organic Chemistry at the University of Santiago de Compostela and director of the Singular Centre for Research in Biological Chemistry and Molecular Materials (CIQUS), José Luis Mascareñas; Aurelio Mateo Alonso, POLYMAT research professor at the Basque Foundation for Science, and award for research excellence from the Royal Spanish Society of Chemistry; and Fernando Martín, professor at the Autonomous University of Madrid, scientific director of IMDEA-Nanoscience and Rey Jaime I Award for Basic Research (2017).

The first to speak will be Professor Mascareñas, who will deliver a conference entitled “Artificial Chemistry in living cells: the power of organometallic catalysis”. In it he will explain how living cells can be considered as “mini factories” in which a large number of chemical reactions occur simultaneously, which are catalysed by natural enzymes and are fundamental to life.

Part of the research of Professor Mascareñas’ group is aimed at finding out if it is possible to expand the range of cellular transformations, by introducing non-natural catalysts in said cells and, with this, developing new types of biomedical tools.

“Chop up” the graphene

Professor Mateo Alonso will deliver the conference “Precision Graphene Fragments”, related to the so-called nanographenes, small nano-sized pieces of graphene. If we consider that graphene is like a sheet of paper, when cutting it into smaller (nanometric) pieces, the electronic properties of these fragments will change with their size and shape. The talk, according to his author, is focused on explaining how these graphene “nanocuts” can be executed in a controlled way.

Third, Professor Martín García, a chemist and physicist by training, will focus his presentation on the so-called “attochemistry”. The appearance of “attosecond” lasers at the beginning of the twenty-first century has made it possible to capture in real time the movements of electrons and nuclei in atoms and molecules and, finally, to control these movements, which has opened the doors to potential new applications in physics, chemistry and, as some studies suggest, biology.

Processes such as biological damage by radiation, ultra-fast charge migration, electron transfer, or ultra-fast structural changes in molecules and biomolecules can be observed for the first time with a temporal resolution never achieved to date. This has led to the establishment of a new scientific discipline: “attochemistry”.

This progress would not have been possible without the development of new theoretical and mathematical models that allow us to interpret the meaning of the observed images. The conference will present the history of this joint venture that has brought together physicists, chemists and computer scientists, theorists and experimentalists, and future implications will be discussed.

Talent retention, up for debate

At 4:00 p.m. the round table is scheduled, in which the different programs for the retention of research talent that are developed in the Valencian Community and in some other regions will be addressed. The debate, of maximum interest to new generations of scientists, will be moderated by Gonzalo Abellán, CIDEGenT researcher at ICMol and president of ACCENT, the Association of Scientists of Excellence of the GenT Plan, the Valencian Government’s program for the “recovery” of researchers.

The table will be formed by Carmen Beviá, regional secretary for Universities and Research; Nazario Martín, deputy director of IMDEA-Nanociencia of the Community of Madrid and former president of the Confederation of Scientific Societies of Spain (COSCE); Aurelio Mateo, Ikerbasque – POLYMAT research professor, María Giménez López, CIQUS-USC Researcher, Galician R+D+i system, and Reyes Calvo, Distinguished Researcher of the CideGent programme and director of the Laboratori de Materials Bidimensionals Quàntics of the University of Alicante.

The full program can be consulted here:

The conference can be followed through this link: