IFIC scientists carry out the first Earth tomography with neutrinos 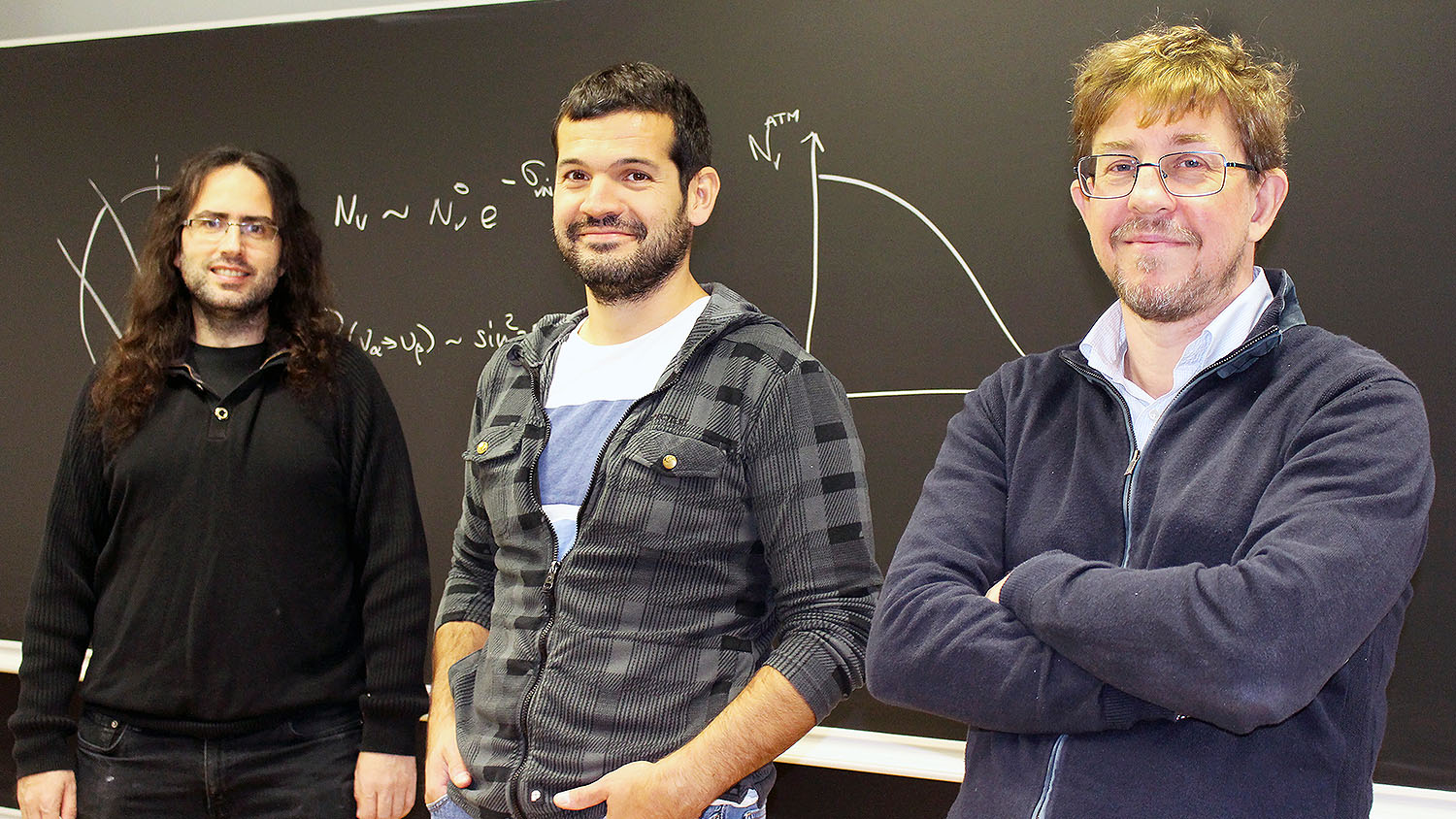 Researchers from the Institute of Corpuscular Physics (UV-CSIC) and the Institute of Cosmos Sciences (UB) publish in Nature Physics the first study of the density of the planet in which they use this elementary particle, the neutrino. The method is analogous to an X-ray photograph or a CT scan. A similar technique was recently used to discover a hidden camera in the Pyramid of Cheops in Egypt.

Researchers from the Institute of Corpuscular Physics (IFIC, CSIC-Universitat de València) and the University of Barcelona publish today in Nature Physics the first CT of the Earth in which they use neutrinos. This elementary particle, one of the most abundant in the Universe, is able to cross the planet without flinching, so it can provide valuable information about the distribution of its density, especially in little-known areas such as the inner core. Scientists have also used neutrinos for the first time to measure other properties of the Earth, such as its mass, and have obtained results consistent with traditional geophysical methods. The study uses data from the IceCube experiment, the largest neutrino telescope in the world located in Antarctica.

Neutrinos are the only known particles that can cross the Earth. This is possible because they hardly interact with ordinary matter, which we see in the Universe and which makes up our planet and ourselves. That is why it is said that the neutrino is the 'phantom particle', and huge detectors are required to trap them. IceCube uses a cubic kilometre of ice from the South Pole to capture the neutrinos with more energy known, some of which come from the most extreme phenomena of the cosmos such as black holes or supernovas.

The neutrinos that have more energy are partially absorbed by the materials that make up the Earth, in a proportion already established by the international scientific collaboration that operates the IceCube experiment. Now, the researchers of the Institute of Corpuscular Physics Andrea Donini, Sergio Palomares and Jordi Salvadó, currently at the Institute of Cosmetology Sciences of the University of Barcelona (ICCUB), have linked these absorption rates with approximately 20,000 high-energy neutrinos produced by the collision of cosmic rays in the atmosphere, known as atmospheric neutrinos, detected by IceCube in 2011. With them they have developed the first study of the density of the planet in which this elementary particle has been used.

“The use of atmospheric neutrinos allows us to have neutrinos coming from all directions, with a wide range of energy and a known flux with enough precision. The amount of absorption of the flux of atmospheric neutrinos depends both on the amount of material traversed and on the energy of the neutrinos, so that by studying the variation of the amount of absorption in different directions for neutrinos of different energy, we can determine the density distribution of Earth”, explains Sergio Palomares, researcher Ramón y Cajal of the CSIC in the Institute of Corpuscular Physics.

The density of the Earth is traditionally calculated by measuring the propagation velocity of seismic waves produced by earthquakes. These data make up the geophysical models that establish values for the density, elasticity, pressure or gravity of our planet. Although this method has a lot of data (100,000 earthquakes “useful” to be studied are produced every year), seismic waves bounce off the surface that separates the inner core (solid) and outer core (liquid). “Neutrinos, on the other hand, go through it all, and offer valuable information about the unknown nucleus of the Earth, where the magnetism of the planet is generated”, says Andrea Donini, Scientific Researcher of the CSIC at the IFIC.

The idea of using neutrinos to study the interior of the planet is not new. Almost half a century ago, a method was proposed to do it using neutrinos created in particle accelerators. Recently, a similar technique was used to discover a room hidden inside the pyramid of Cheops using atmospheric muons, some ‘relatives’ of the neutrino. But until the launch of IceCube in 2010 there was no instrument capable of detecting high energy neutrinos that cross the Earth in sufficient quantity to carry out this study.

The work published today shows how neutrinos can be used to study the structure of the interior of the planet, but the data used is still scarce to compete in accuracy with other geophysical techniques. The researchers hope to access the data set obtained by the IceCube collaboration from 2011 until now, which will improve the accuracy of the results, both in the mantle and in the terrestrial nucleus. And the prospects for this new technique improve with the entry into play of KM3NeT, a new neutrino telescope that is built in the Mediterranean, where the IFIC leads the Spanish participation. With this new experiment neutrinos will be detected in both hemispheres, which allows a more accurate image of the interior of the Earth using this elusive particle.