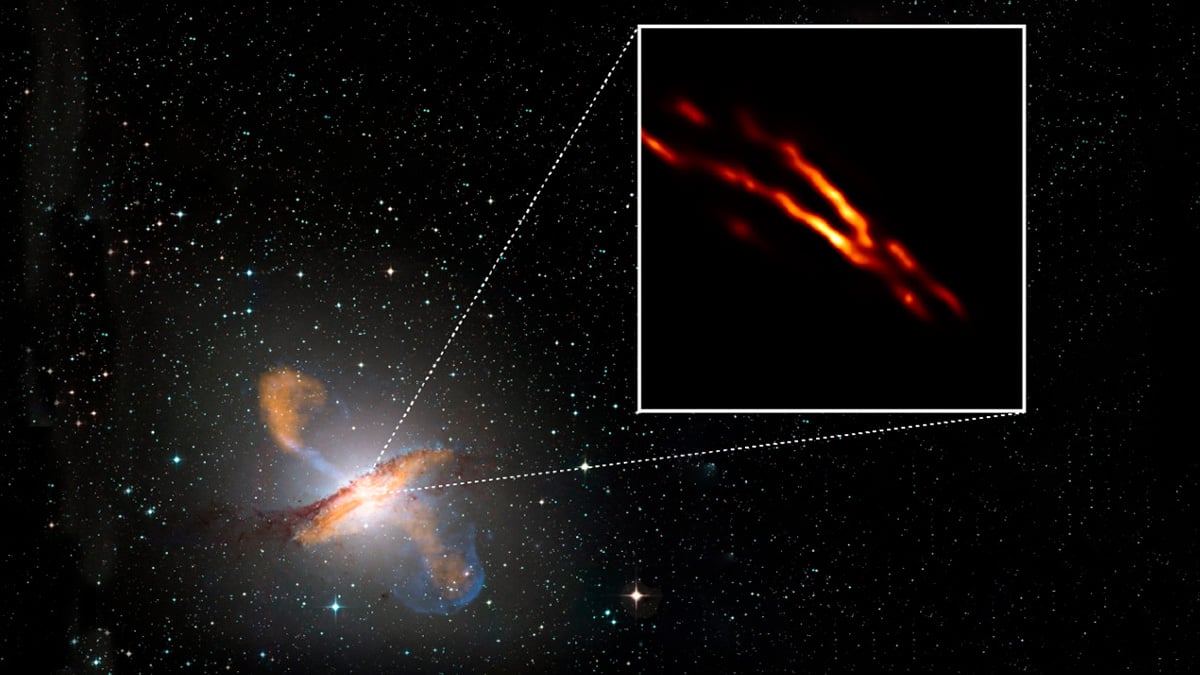 An international astronomy team, in which the University of Valencia participates, has just published in Nature Astronomy the image of the heart of the Centaurus A galaxy in the finest detail ever. The work specifies the exact point where the supermassive black hole of this galaxy is located and allows us to observe how it is originated a gigantic jet of matter escaping from the black hole at speeds very close to that of light. The image challenges current models of the origin of jets in black holes.

The Centaur Galaxy (Centaurus A) is one of the most intense radio sources in the sky and its emission has been studied extensively across the entire electromagnetic spectrum, from radio waves to the most energetic gamma radiation. At the heart of Centaurus A, there is a black hole with a mass equivalent to 55 million suns, halfway between the black hole of the M87 galaxy (of which the EHT obtained the famous image, with a mass of more than 6000 million suns) and the black hole in the centre of our galaxy (with only 4 million solar masses).

In this work, EHT observations –taken during the 2017 campaign– have been used to obtain an image of the Centaurus A black hole with an unprecedented level of detail.

Two male astronomers and a female astronomer from the University of Valencia are part of this international research team based on the Event Horizon Telescope (EHT) Collaboration, known for having obtained the first image of a black hole. They are Rebecca Azulay, who performed support astronomer tasks at Pico Veleta – the only European radio telescope that participated in the observations –; Iván Martí-Vidal –CIDEGENT researcher at the University of Valencia, who designed and applied the calibration algorithms for the most sensitive part of the EHT–; and Alejandro Mus –researcher in training, whose work focuses on the development of algorithms that will help reconstruct dynamic images of our Galactic Centre.

“These results allow us to see, for the first time, how matter is structured around this supermassive black hole with a level of detail of just over 20 light-hours. This allows us to contemplate the processes that give rise to the birth of the mysterious relativistic jets, which are found in many of the most massive black holes in the Universe”, says astronomer Michael Janssen, lead author of the work.

“We have obtained an image of Centaurus A with a resolution more than 15 times higher than the highest ever obtained in observations of this source. This formidable image is allowing us to study the structure of the black hole jet, from the smallest scales – the apparent size of a golf ball on the Moon, as seen from Earth – to the largest scales – an apparent size similar to the size of the Moon itself. The amount of information that we now have is overwhelming”, highlights Iván Martí-Vidal.

Supermassive black holes, like the one that resides in the heart of Centaurus A, feed on the gas and dust around them, drawing it into their deep gravitational well. This process, called ‘accretion’, releases huge amounts of energy, much of which is emitted into outer space, resulting in what we know as ‘active galaxies’. While most of the accreted matter is engulfed by the black hole, a small fraction of that matter can escape and form so-called 'relativistic jets', one of the most mysterious phenomena in modern astrophysics.

Today, science has different models to explain the acceleration and propagation of matter in relativistic jets. However, very little is still known about the very origin of these jets and how they can spread to cover distances much greater than the size of their entire host galaxy. “These EHT observations will help us find the answer to some of these fundamental questions”, says Alejandro Mus. “The new EHT image shows that Centaurus A’s jet is brighter at its outermost part, compared to the brilliance of its spine, that is how its central part is called. This is the first time that we have seen this phenomenon so pronounced in a relativistic jet”, adds Mus. “The results allow us to rule out several theoretical models of jet formation, which are unable to reproduce the enormous contrast observed between the ends and the spine of the jet”, says Matthias Kadler, from the University of Würzburg and co-author of the work.

Thanks to these observations of Centaurus A, it has been possible to locate the supermassive black hole with great precision, identifying it with the point where the relativistic jet is born. Based on these results, the team of astronomers plans future observations at even higher radio frequencies, which will make it possible to obtain images that are even sharper than those published now. The team also does not rule out that, in the future, in the longer term, images of the shadow of this black hole may be obtained, incorporating orbiting telescopes into the EHT network.