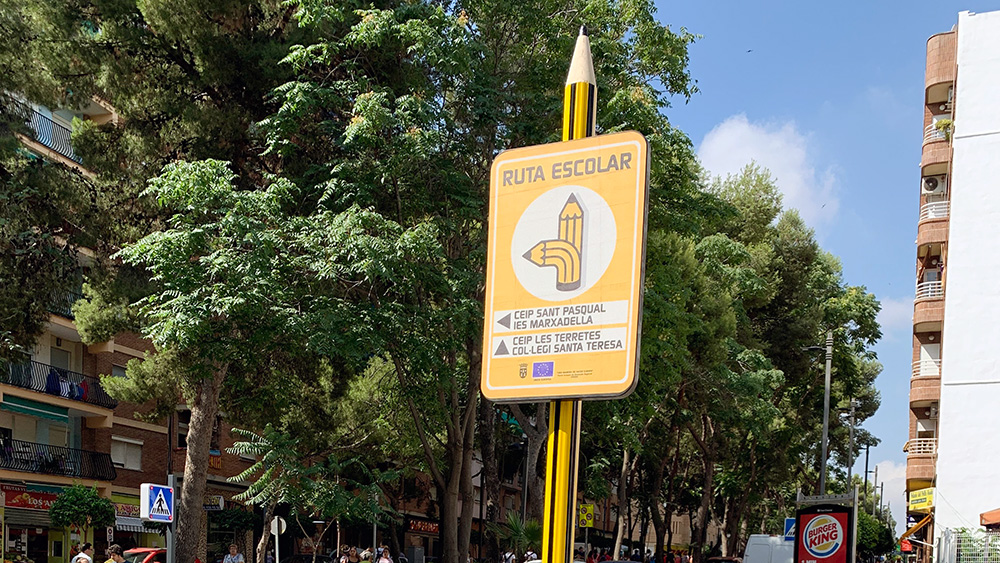 The LISITT group of the Institute of Robotics and Information and Communication Technologies (IRTIC) has implemented a network of safe and intelligent itineraries that allows parents to monitor their children's route and receive notification when they arrive at the school. The school routes have intelligent and 3D pedestrian crossings in the areas of greatest risk.

This is a collaboration between the LISITT group (Integrated Laboratory of Intelligent Systems and Traffic Information Technologies), the IRTIC, the company ESAM Tecnologías, in the Parc Científic de la Universitat, and the Torrent City Council.

This year the project Safe School Routes in Torrent has begun the pilot phase in which 3500 schoolchildren from 8 infant and primary schools and secondary schools in the city are participating. The project aims to create a network of safe routes from the point of view of road safety, reduce the number of private vehicles and encourage the autonomy of children.

Following the road safety analysis and the establishment of routes, vertical signs identifying the routes and horizontal signs indicating the route, made from recycled tyre rubber, were implemented. One of the technological innovations that have been implemented are the intelligent crosswalks which aim to improve the visibility of drivers and children. In this way, the system uses intelligent cameras to detect the proximity of a person to the crosswalk, and is activated at night and during the day with different LED light signals that inform the driver of the proximity of the pedestrian. In addition, pedestrian crossings have been painted to simulate being three-dimensional.

Through the city's communications network, based on data transmission by means of municipal lighting PLCs, the project has covered the school routes with sensors. Wifi and bluetooth detectors have been installed along the route and in the educational centres to identify the MAC of the device carried by the children. These devices - key rings that school children carry in their backpacks - monitor the route and send a notification to parents when they arrive at the centre. This is a technology patented by the group itself and the University of Valencia.

These two technological solutions aim to improve road safety and the families' confidence in the safety of the route, thus promoting transport on foot to the school. The project will analyse the real and perceived effect that the provision of this type of tool has when families decide to have their children use these routes.

Gamification in an intelligent city

Every week each class is informed of the number of kilometres they have covered. Thus, by turning the transfer to the school into a game, the students enter the competition to see which class saves the most CO2 emissions into the atmosphere. As the project's researchers explain, "this is an example of how gambling in an intelligent city can change behaviour".