The big topics of Astronomy, to be debated at the European Astronomical Society Annual Meeting 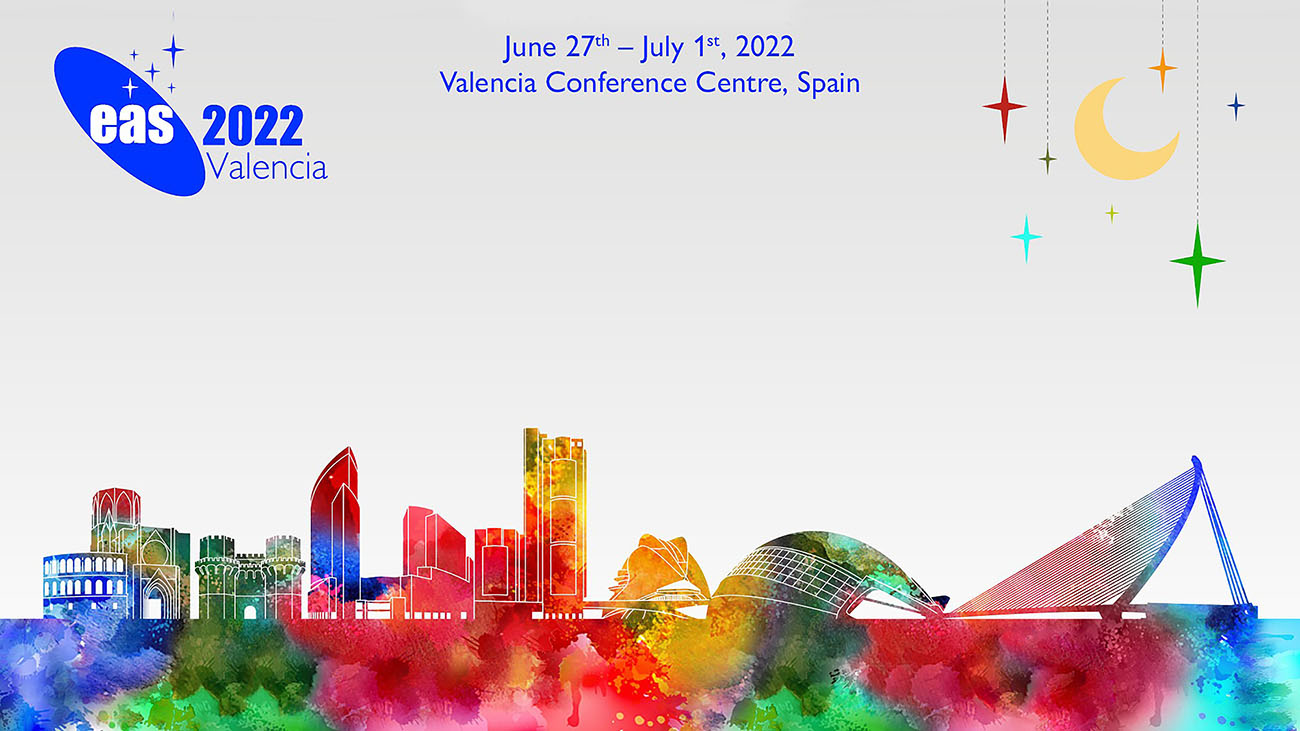 The University of Valencia organises this year the European Astronomical Society Annual Meeting, one of the most relevant events in astronomy worldwide. With a multidisciplinary program that includes very diverse aspects of scientific research in astronomy, the conference will bring together nearly 2,000 participants, including leading specialists, Nobel Prize winners and representatives of international organisations.

After two online editions conditioned by the pandemic, the University of Valencia hosts, starting this Monday, June 27, the largest European astronomy conference, the European Astronomical Society (EAS) Annual Meeting. Coordinated by the Astronomical Observatory (OA) of the University of Valencia and the Institute of Corpuscular Physics (IFIC-UV/CSIC), the meeting will take place at the Valencia Conference Center.

With more than 25 years of tradition, the EAS conference expects the on-site participation of more than 1,700 people, in addition to the 200 registered to follow the congress virtually. #EASValencia2022 offers 15 Symposiums, 36 Special Sessions, more than 600 presentations and 1000 ePosters.

Among the programme of plenary lectures, the participation of great references in astronomy today stands out, such as Michel Mayor and Didier Queloz, the discoverers of the first exoplanet around a star like our Sun, which led them to win the Nobel Prize in Physics in 2019; or as Carme Jordi, Professor of Astronomy and Astrophysics at the University of Barcelona – member of the Gaia Science Team, ESA’s advisory body –, who will provide information on the Gaia satellite, whose data already feeds the 3D astronomical catalogue of more than one billion stars. Or like Mª Teresa Fernández de la Vega, former Vice President of the Government of Spain and President of the Women for Africa Foundation, with 10 years of experience promoting and supporting the leadership of African women in all areas and, in this case, in training and scientific research in the field of Astronomy, to give a few examples.

The study of exoplanets, the Sun, gravitational waves, the black hole present in the Milky Way, the exploration of the Solar System, or the problem of artificial satellite constellations that contaminate space observation, which hinders the work of scientists, will be topics to be debated in this space for Astronomy aimed at strengthening and improving links between scientific communities, expanding their connections and promoting European networks. The long-awaited James Webb Telescope (JWST, ESA-NASA-Canada), the first direct image of our Galaxy’s central black hole (EHT consortium), or the celebration of 60 years of operation of the European Southern Observatory (ESO), will complete the programme.

In addition to the plenary sessions, the conference includes different symposiums held in parallel, as well as special sessions and meetings.

On the other hand, the congress hosts the delivery of different awards in the field of Astronomy: the Fritz Zwicky Prize for Astrophysics and Cosmology, which falls to the former president of the International Astronomical Union Ewine van Dishoeck; the Tycho Brahe medal, whose winner is the French astrophysicist Jean-Luc Starck, or the MERAC awards for the best doctoral theses in astronomy, one of which goes to the Spanish Núria Miret-Roig.

The programme also includes an informative conference open to the general public, by Michel Mayor (Nobel Prize in Physics 2019), from the University of Geneva. The lecture entitled ¿Otros mundos en el cosmos? La búsqueda de planetas similares a la Tierra y... ¡quizá formas de vida! (‘Other worlds in the cosmos? The search for Earth-like planets and... perhaps life forms!’). It will be next Wednesday, June 29 at 7:00 p.m. in the Santiago Grisolía Auditorium of the Science Museum. Access is free, prior registration.

In its most playful aspect, the congress will feature the performance of the Muixeranga d’Algemesí, as well as the AstroRun, a non-competitive 6 km race that will run on Wednesday 29 through the Turia Gardens.

This meeting is a space for the exchange of information and for the advancement and improvement of the study in the field of astronomy, a unique opportunity also for the youngest, who will be able to share impressions with great references in this scientific field.