The team of Nothingbutnet S.L., awarded as 'Entrepreneur of the Year' for the II Prizes Paterna Ciudad de Empresas 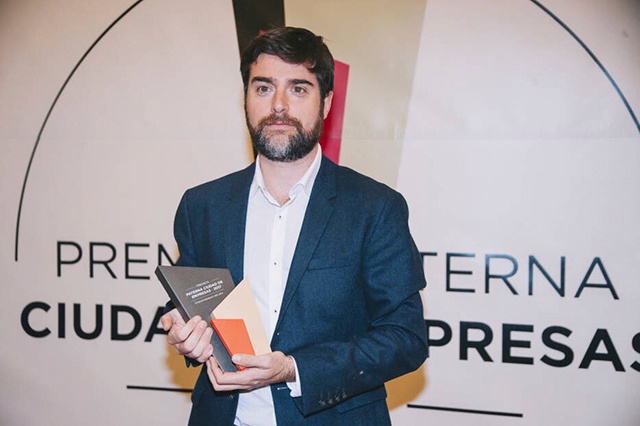 The team that runs the technological company Nothingbutnet SL, developer of software and applications related to the sports and linked to the University of Valencia Science Park, has been recognized as 'Entrepreneur of the Year' in the second edition of the prizes Paterna Ciudad de Empresas, celebrated at the Gran Teatro Antonio Ferrandis in the town. Specifically, what has been valued is the development of Nagi technology, a device based on bluetooth signal reception that helps rescuers to avoid possible drownings in swimming pools.

On this regard, the CEO of the company, Javier Bosch, who received the award from the regional secretary of Sustainable Economy, Productive Sectors and Trade, Blanca Martin, highlighted: "This award is an endorsement for the team, investors and to the customers. In the phase in which we are nowadays, we need to convey the confidence that they are in good hands. For that reason, this recognition is an endorsement of a job well done. Now, in fact, we are going to open an investment round and this prize is a package that the money does not give to you"

Nothingbutnet competed for the first time in two categories of the Paterna Ciudad de Empresas awards, to which it presented a descriptive report on the development of its third digitization technology applied to the world of sports, in this case swimming. This is Nagi, a device based on reception of bluetooth signal that detects subsidence, but also any anomalous interruption of movement, therefore, can also alert of surface drownings.

Finally, it has won the recognition of the category 'Entrepreneur of the Year' and has been among the three finalists in the category 'Research and Business Innovation', which was for the multinational Faurecia, developer of automotive equipment. "There was a lot of competition, companies of a very high level," Javier Bosch emphasized. "Next year," the CEO of Nothingbutnet said, "we are going to present ourselves in the 'Internationalization' category, since we have already closed agreements with Mexico, Turkey, the United States and Israel."

The Valencian startup, which started its activity as winner of the VLC / STARTUP 2015, has more than five national and international awards, among which is the first European HYPE prize for Best Technological Innovation Project of 2016, whose end was held at the Olympic Games in Rio de Janeiro 2016.

Paterna Ciudad de Empresas is a non-profit association that, promoted by the City of Paterna through the Department of Business, was born at the end of 2011 grouping all local economic agents. Its president and mayor of Paterna, Juan Antonio Sagredo, explained that "with more than 2,800 companies installed, Paterna is, today, one of the main industrial settlements of the Valencian Region and Spain. We are leaders in square meters of industrial floor and we want to be leaders in terms of the quality and modernity of this industrial surface".

In addition to Nothingbutnet and Faurecia, Aimplas was awarded as 'Socially Responsible Company'; the office of advice and provision of legal and economic-fiscal services, B2B Corporación Jurídica, as 'Local MicroSME'; Rosalía Mellado de Lasertall, who runs a company that offers laser cutting services of different materials, was recognized as 'Entrepreneur Woman'; and finally, Das Audio, a company dedicated to the design and manufacture of sound reinforcement systems, received the award for the 'International Trajectory and Projection'.